The Pearl Fishers at LA Opera

Last night we opened The Pearl Fishers at LA Opera.  I worked on this production in 2015 when it was performed at the Metropolitan Opera, so when the Lighting Designer Jennifer Schriever was not available, she called and asked if I could step in as Associate.  I was responsible for remounting the lighting design under the constraints of LA Opera’s rep schedule, and we received glowing reviews all around.

The 2016-16 Metropolitan Opera season has come to a close.  It was an amazing place to work for the last three years.

After three amazing seasons at the Met, my wife and I have decided to move to Los Angeles for a number of reasons.  I’ll be heading out there at the end of June and will be rebuilding this website, and be available for work starting at the beginning of July.

We’re starting prep for the Met’s 15-16 season, which looks to be another intense thirty-three weeks.  Six new productions, with a diverse set of guest lighting designers – I’ll be working with Don Holder, Peter Mumford, Jennifer Schriever, Paule Constable and Urs Schoenebaum.  The season opens on September 21.

Once again, I failed to post any updates during the season, but it is now over. We opened twenty-six operas (six of them new productions) over thirty-three weeks.  It’s an amazing place to work.  I’ve got a few weeks of post-season work to do but I am generally available for work through July 10th.

Tonight opened the season at The Met.  It was looking a little dicey there for a while but all the unions came to terms with management, and while not everyone is thrilled with the result, I think everyone is happy that the season is going on as planned.

Back to the Met

I’m back at the Met preparing for our 2014-15 season; there are some looming labor issues you may have heard about, but I am hopeful that we’ll work everything out with management without putting the season in jeopardy.

On a lighter note, one of the new productions we are opening this season is John Adams’ The Death of Klinghoffer, which has never been performed at the Met.  I am excited about this one for a few reasons, one of which is that I became a huge fan of Mr. Adams’ music while working at New York City Ballet (he is a frequent collaborator of the Balletmaster-in-Chief, Peter Martins).  Another reason is that Jean Kalman’s lighting design prominently features this contraption, creating an intense sun behind an RP drop.  The things we can do here are pretty amazing. 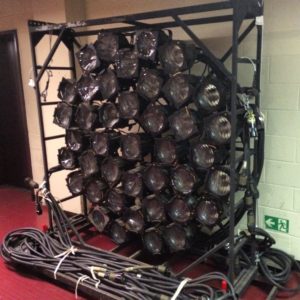 The End of the Season

Sorry for the lack of updates — I’ve just been incredibly busy at The Met, which is taking up pretty much all my time these days. We’ve just finished our season and after a few weeks of wrap-up in the office, it’s time for a break from Lincoln Center.  I’m available for outside work until mid-July, when I return to the Met to start preparing for the 2014-15 season.

The Nose Live in HD

This afternoon was my first Live in HD Broadcast with the Met.  We broadcast approximately ten operas per season live to movie theaters on six continents (today was The Nose).  It requires some amazing technology and I’m fortunate to get to be a part of that on a regular basis here.

Tonight was opening night of my first season at The Met.  It’s been a crazy few months — the scale of things here is bigger than anything I did at NYCB, but it is an incredible challenge and I look forward to more of it in the future.